Cathy and Al came in by bus from PV on Thursday. We walked to the bus depot to meet them and quickly whisked them across the road to Papa Gallo’s for two-for-one margaritas and a plate of nachos before heading home. That will teach them to drop in expectedly.

That afternoon and evening went by quite fast and a few wines and coffee tequilas were consumed along with some jalapeño poppers that I had made as an appy.  Rosalie provided a delicious dinner as usual. We somehow made plans to go to Barra the next day and toddled off to bed.

The next morning we set out bright and early (9:30) and caught the bus. Rosalie had a follow-up appointment with the doctor in Barra so Al, Kathy and I went for a coffee. Rosalie texted after about 10 minutes saying there was a line-up and she wasn’t going to wait. She met up with us and we walked on up to the Malecon.

Then, we decided to catch a water taxi to the little town of Colimilla across the lagoon. The taxi was free provided we ate at the restaurant. Al and Cathy wanted to go for a walk first so we headed into town. The streets there are quite steep so Rosalie and I left them to continue, while we waited for them back at the restaurant. 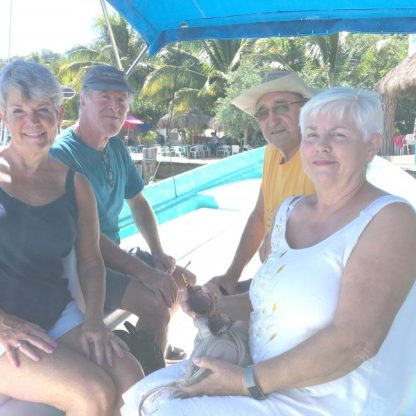 Us on the boat

When they got back they told us that we were actually located in the state of Colima, not the state of Jalisco. This came as a shock because we knew that the border is about 20 km south of us. Out came the phones with Google maps and we looked it up. Sure enough, the thin strip of land we were on was in Colima. However, the tip of the peninsular where the Grand Bay Resort is located is still in Barra and therefore in Jalisco state. No wonder I’m going nuts.

I had my usual Ensalada con Cameron and it’s the best I’ve had yet. It was slightly pricey but so large that I couldn’t finish it all.

We caught the water taxi back and enjoyed a restful afternoon. That evening we went out to ‘Restaurante Albatross’ for dinner and entertainment. Afterwards, we walked up to ‘La Oficina’ to watch Dave Spinks play. Unfortunately, the girls didn’t need a drink so we didn’t stay and went home instead.

Now it’s party day. My first task was to zip up to town on my trusty bike to see if Carlos was there that day, he was. Kathy needed to buy a new purse. Rosalie was pretty tired after the last few days so she stayed at home while I walked into town with our guests as I couldn’t fit all of us on my bike. I guess I’m not as much a Mexican as I thought I was.

There wasn’t one there that Cathy liked so we went to get some groceries. I found a couple of tetra packs of Chardonnay wine so I grabbed them as they were the last two. They were 86 pesos each ($6). Thinking I had got a bargain as this was a name brand wine, I rushed home to tell Rosalie who was equally thrilled. We did a taste test and decided it was no better than the 50 peso variety. Such is Mexico.

The evening went well. We had about 20 guests but only 8 chairs and nowhere near enough plates etc. But we have excellent neighbours in Gerry and Elaine so we raided their patio and kitchen. From them, we borrowed a long table, 6 chairs, plates and cutlery.

The party went really well. I had the idea to call a travelling troubadour named Gerry (a different one) to sing for us. Rosalie had to call him though as my Spanish isn’t quite there yet. She had a really hard time getting him to understand but he eventually got it and even showed up reasonably on time.

The following video is not the best but we don’t have a lot of outside lighting.

Al and Cathy left this morning after a very nice visit.